I’m hopping on the hipster bandwagon and talking about Kombucha today. This is my favourite beverage that is low in calories, great for the gut and an all-around awesome tasting drink.

If you haven’t heard of it yet, Kombucha starts as a green or black tea which is fermented by adding a SCOBY (symbiotic culture of bacteria and yeast) in the tea to grow for 7-14 days. The culture of bacteria grows while any added sugar is temporarily turned to alcohol as fermentation proceeds. The alcohol then removed as it is dissolved into organic acids. The SCOBY metabolizes most of the sugar and caffeine, leaving a low calorie carbonated beverage.

Kombucha can be made from home if you can find some SCOBY but it is much more convenient to buy it at your local health food or grocery store.

One of the reasons Kombucha has become so popular recently is the long list of health benefits associated with the fermented tea. Benefits include improved digestion, energy production, joint care and immune function. The list goes on but most importantly Kombucha contain probiotics. 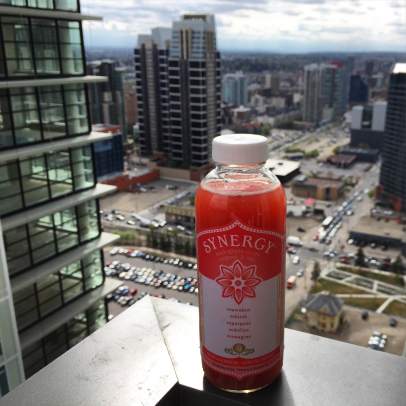 Although some can argue that there is no correlation between health benefits and Kombucha due to several previous outdated scientific studies that could not relate any benefits to Kombucha. More recent studies have been published also finding both evidence for and against health benefits but there has not been any clinical human trials published on the biological activities in Kombucha, all studies were performed on animals, specifically mice.

Studies did conclude that the profile of bacteria within Kombucha contains Gluconacetobacter (>85 percent in most samples), Acetobacter (<2 percent), Lactobacillus (up to 30 percent in some samples) and Zygosaccharomyces (>95 percent) varying in amounts depending on the batch (Marsh et al. 2014). Some of these bacterial strains are also found in other fermented foods and yogurts which do have conclusive scientific proof for various health benefits associated with the probiotic content (Hill et al. 2014)

In my opinion, future studies will be focusing more on the importance of the microbiome and proving the importance of eating food or drinks enriched in probiotics such as Kombucha as an effective way of obtaining overall health and wellness.

On-going research at The Western Canadian Microbiome Centre located at my university, The University of Calgary is currently looking into the relationship between mental disorders such as depression and anxiety and the role the microbiome plays on these disorders as well as how the microbiome is connected to inflammatory diseases. This is a great step towards finding a cure for autoimmune diseases.

2 thoughts on “The Microbiome and Kombucha”

Still not riding at 100% after breaking my arm and snapping some tendons in my elbow in February but I couldn’t be more stoked to get out for a few laps before the bike park season is over.
Down with the thicccness in 2021
Island summers are never cancelled 🏝
Skipping leg day since 2013...
All limbs intact after a muddy opening weekend in Whistler