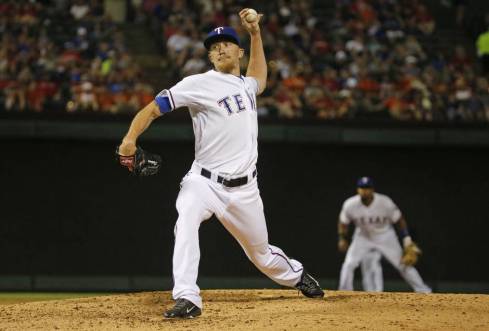 If anyone has been watching the MLB Division Series between the Toronto Blue Jays and the Texas Rangers, maybe you’ve seen closing pitcher Jake Diekman pitch 4 innings in the first two games of the series. He pitched 4 innings with 0.0 ERA with 44 pitches in two games. Checkout this recently posted article on Jake: http://sports.yahoo.com/blogs/mlb-big-league-stew/gut-it-out–after-tough-offseason–jake-diekman-is-ready-to-talk-about-his-disease-164232506.html

Jake Diekman recently opened up about his struggle with Colitis and the difficulties of playing professional baseball with an autoimmune disease. Jake has become an advocate for Crohn’s and Colitis by raising money and awareness by making his own “Gut it out” t-shirts.

Although I’m a Blue Jays fan, I can’t help but cheer on a guy who has made it to the highest level while also suffering from inflammetory bowel disease. I cannot express how motivating and inspiring it is for me to see others with IBD playing professional sports without letting their disease get in the way.

If you would like to support Jake and the Crohn’s and Colitis Foundation of America, head over to https://athletesbrand.com/Royal/ and buy an awesome “Gut it out” t-shirt with all proceeds going directly to the CCFA!