Flashback to 2010 when I snapped my fibula playing hockey and had to get 8 screws and plate to hold everything together. I still have the plate in 5 years later with minimal issue.
Part of dealing with Crohn’s is diseased sections of intestine do not fully absorb nutrients like a normal, healthy person. I am deficient in many vitamins and nutrients such as iron, B12 and calcium. Being deficient in calcium can cause osteoporosis. Doctors found mild osteoporosis when I most recently broke my leg likely due to the malabsorption from Crohn’s Disease. I previously touched on this subject in Crohn’s Related Side Effects (Part I). The mild osteoporosis may have also been the cause of the several other breaks I’ve had. I have almost identical scars on both legs from 3 separate times that I have broken my legs. I broke both the tibia and fibula in several places in my right leg in 2006 and had 4 pins installed. In 2009, I fractured my right leg again and tore all the ligaments in my ankle and in 2010, I broke my left leg. Other broken bones I had to deal with include a broken wrist, fractured arm and thumb as well as my worst injury, a ruptured quadriceps tendon in 2014, likely a side effect of prednisone. 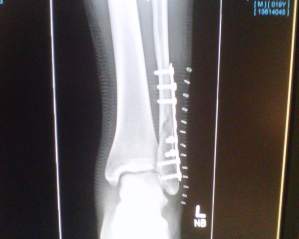 Dealing with Crohn’s disease does not only mean you are dealing with intestinal issues but it also affects your entire body. Regularly scheduled blood tests can catch deficiencies and possibly prevent things like this from happening. Be sure to be proactive and take a role in your own health by trying not to rely on a physician to do all the work for you.